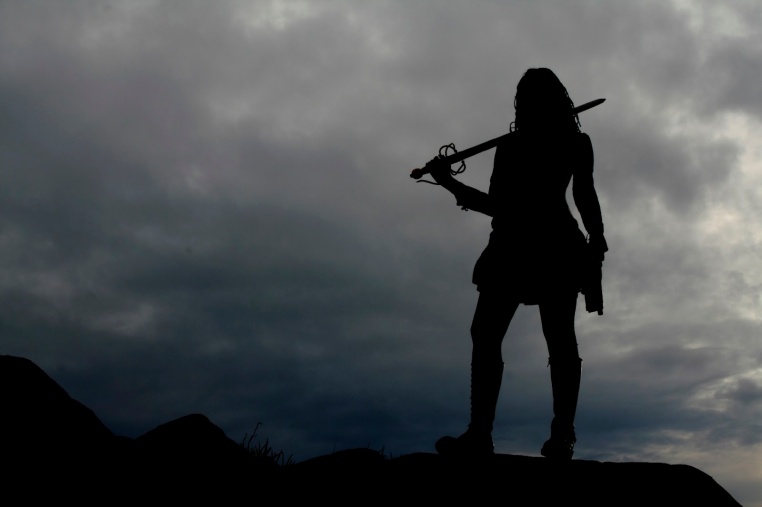 These are lyrics from the song by Beyoncé – “Freedom.”  A modern day anthem of women’s empowerment, these lyrics also apply to Deborah, the ancient warrior general and her story of a woman whose courageous and unfailing faith in God saved the infant nation of Israel from utter destruction.  Deborah understood, because the Lord was on her side, that no weapon formed against her and her nation could prosper.  She acted as judge, prophet, and warrior;  who didn’t quit on God and didn’t quit on herself.

We see in the story of Deborah, that Deborah does not act alone.  She partners with Barak, the commander of the Israel army, and another brave and audacious woman named Jael. God uses this trio to bring victory and freedom to the Israelites; but, it is Deborah whose leadership is at the fore of the story in Judges 4&5.

So, once and again, a woman teaches us through her own story of faith (in the bible) that bravery,  audacity, intelligence, savvy, and determination are characteristics which are part and parcel of being feminine, and being connected to the will of God.

We find through Deborah’s story that God chooses and uses her as wise counselor, judge, military strategist, prophet, mother, rebel, wife, friend, to win the victory over the Canaanites. It is still another reminder to us, as women, that God is no respecter of person – God will and does use whomever God chooses to bring about God’s perfect will in the earth.   Let’s take a look a Deborah’s story found in Judges 4 & 5.

4 After Ehud’s death, the Israelites again did evil in the Lord’s sight.  So the Lord turned them over to King Jabin of Hazor, a Canaanite king.  The commander of his army was Sisera, who lived in Harosheth-haggoyim.  Sisera, who had 900 iron chariots, ruthlessly oppressed the Israelites for twenty years.  Then the people of Israel cried out to the Lord for help.

Deborah, the wife of Lappidoth, was a prophet who was judging Israel at that time.  She would sit under the Palm of Deborah, between Ramah and Bethel in the hill country of Ephraim, and the Israelites would go to her for judgment.  One day she sent for Barak son of Abinoam, who lived in Kedesh in the land of Naphtali.  She said to him, “This is what the Lord, the God of Israel, commands you:  Call out 10,000 warriors from the tribes of Naphtali and Zebulun at Mount Tabor.  And I will call out Sisera, commander of Jabin’s army, along with his chariots and warriors to the Kishon River.  There I will give you victory over him.”

“Very well, she replied, “I will go with you.  But you will receive no honor in this venture, for the Lord’s victory over Sisera will be at the hands of a woman.”  So Deborah went with Barak to Kedesh.  At Kedesh, Barak called together the tribes of Zebulun and Naphtali, and 10,000 warriors went up with him.  Deborah also went with him.

Now Heber the Kenite, a descendant of Moses’ brother-in-law Hoab, had moved away from the other tribes and pitched his tent by the oak of Zaanannim near Kedesh.

When Sisera was told that Barak son of Abinoam had gone up to Mount Tabor, he called for all 900 of his iron chariots and all of his warriors, and they marched from Harosheth-haggoyim to the Kishon River.

Then Deborah said to Barak, “Get ready! This is the day the Lord will give you victory over Sisera, for the Lord is marching ahead of you.”  So Barak led his 10,000 warriors down the slopes of Mount Tabor into battle.  When Barak attacked, the Lord threw Sisera and his chariots and warriors into a panic.  Sisera leaped down from his chariot and escaped on foot.  Then Barak chased the chariots and the enemy army all the way to Harosheth-haggoyim, killing all of Sisera’s warriors.  Not a single one was left alive.

Meanwhile, Sisera ran to the tent of Jael, the wife of Heber, the Kenite, because Heber’s family was on friendly terms with King Jabin of Hazor.  Jael went out to meet Sisera and said to him, “Come into my tent, sir.  Come in.  Don’t be afraid.”  So he went into her tent, and she covered him with a blanket.

“Please give me some water,” he said.  “I’m thirsty.  So she gave him some milk from a leather bag and covered him again.

“Stand at the door of the tent,” he told her.  “If anybody comes and asks you if there is anyone here, say no.”

But when Sisera fell asleep from exhaustion, Jael quietly crept up to him with a hammer and tent peg in her hand.  Then she drove the tent peg through his temple and into the ground, so he died.

When Barak came looking for Sisera, Jael went out to meet him.  She said, “Come and I will show you the man you are looking for.”  So he followed her into the tent and found Sisera lying there dead, with the tent peg through his temple.

So on that day Israel saw God defeat Jabin, the Canaanite king.  And from that time on Israel became stronger and stronger against King Jabin until they finally destroyed him.

Many Old Testament scholars  agree that Deborah is the most important female figure of the Hebrew scriptures. This is quite a declaration, as the Old Testament gives testimony to the stories of many awesome women of God.  Indeed, the book of Judges has more stories about women than any other book of the bible (19 separate accounts in all). Yet, if we are honest with ourselves, most of us are not familiar with the Deborah/Jael narrative found in Judges 4 and  The Song of Deborah (Judges 5)- one of the oldest writings of the entire bible. Some bible scholars believe that Deborah may have written and sung the Song of Deborah herself.

The most important feature of Deborah’s story is the presentation of not one; but, two valorous women who worked in concert to win the victory and secure Israel’s freedom from the Canaanites.  Deborah, from the very beginning of her story, is clearly a take charge woman, who is standing in the authority, leadership, and anointing which God has bestowed upon her. Jael, her fierce female counterpart, responds in swift and cunning retaliatory action to defeat the evil and vengeful Sisera. When Sisera enters the tent of Jael, he has NO IDEA what he will ultimately encounter. He goes in; but never comes out! The victory, as Deborah prophesies to Barak, is handed over to a woman.

The Hebrew word for “judge,” holds several different meanings.  It can have the sense of ruler, military commander, and/or arbitrator.  Deborah, who sat under her own palm tree to impart judicial wisdom to the people of Israel, embodied all three.  Not only is Deborah the only female judge of Israel; but Deborah will secure Israel’s victory over a nation which decided to usurp Israel’s freedom.

When God speaks to Deborah, telling her of King Jabin’s ultimate defeat, Deborah does not question or doubt the word of God.  This “woman of torches,” that is “fiery woman”  also “bee” in Hebrew, is a warrior, and a military leader, who knows God’s battle plan shall not fail.  She goes to Barak, the commander of Israel’s army, and says to him:  “Get ready.  This is the day the Lord will give you victory over Sisera, for the Lord is marching ahead of you.”

The Talmud suggests that Barak (whose name means “lightning” and corresponds to the signature “Lappidoth”) was Deborah’s husband, which may explain why he would not go into battle without her.

Barak, the commander of the army, insists that Deborah go with him.  His request informs us as to the charisma, power, and fearlessness, of this prophet and hero.  Deborah reads Barak like a book, at this point in her story, and drops a bomb on the commander:  “While you may fight the battle, the final victor will be a woman.”

The battle ensues.  The Lord, God of Hosts, wars on behalf of Israel and Judges 5 tells us the result.  While Canaan might have 900 chariots, iron and horses are meaningless when God rains down a flood from the heavens and Sisera’s army are drowned in a sea of mud.  Deborah’s prophecy rings true.  Sisera is handed over to another woman warrior, Jael, who does not hesitate to give him what he ultimately has earned – death at the hand of the one he least suspected.

Deborah’s story is remarkable and clear. Again, we can declare definitively, “But, not for a woman’s virtues………..”

The story of Deborah, the Warrior, teaches us many different things; but, especially demonstrates that assigned gender roles are meaningless when God calls us into action for God’s purpose and will. In Deborah’s story, God gives her the roles of a lifetime: Prophet, (Mother of Israel), Judge, Leader, Warrior, and Counselor.

God equips her for leadership and Deborah acts accordingly. While we may never reach the lofty position of a Deborah, God has important assignments for each of us. We are created for the roles of a lifetime – ones which God has predestined and preordained (uniquely) for each of us. Deborah knew who she was and what she needed to do because, ultimately, she exercised her “fiery” faith in her God, who was with her. She NEVER quit because she knew she was warring  and winning on behalf of God and God would not quit on her. What a lesson for the women of God of today!  Don’t quit – keep on fighting – because a warrior doesn’t quit on herself,  when she knows God is on her side!

Questions for our study and consideration:

Deborah is the only female judge and the only judge which was also prophet in the Old Testament. Why do you think God, who could have chosen anyone to defeat King Jabin, chose Deborah?

How do you feel about Jael and her part in the defeat of Canaan?

In thinking about Deborah and Jael and what they offered to God, through their service to Israel, what does it mean, as a woman of God, to be “bulletproof?”

How can you use this story to inform your own life? Explain?

“The enclosed materials are the property of Maxine E. Garrett and Tabitha’s Daughters Bible Empowerment Series. They may be used by you with our permission, which may be revoked at any time. All copies of the materials must include the following notice: “This material is Copyright [2015] Maxine E. Garrett and Tabitha’s Daughters and is distributed with our permission.”

“Fear’s contagious, but so is courageous.” – Betty Williams

“One is not born a woman; one becomes one.” – Simone de Beauvoir

“In the last days, God says,” I will pour out My Spirit on all people; your sons and your daughters will prophesy…….” Joel 2:28(a)

On this day and every day, May the Light of God now pour forth upon me, through every aspect and cell of my being, that I may be Light unto Others.  May where I walk and where I stand be Holy Ground.  May every encounter….be a Holy Encounter.