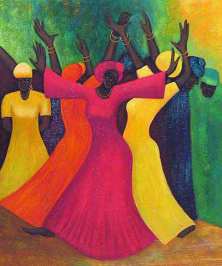 It is a common occurrence, especially for us Baby Boomers, to look back with rose colored glasses to the experiences of our youth.  One of the things we love to remember are the neighborhoods in which we were raised.  “How green were our valleys,” – the places and spaces of our childhoods.  Our communities were filled with compassionate, hospitable neighbors, who helped to raise us, in a very real sense.  Before the aphorism, “It takes a village to raise a child,” ever became popular, we lived out this idea in our communities which we experienced as The Neighborhood.

Our parents could rely upon their neighbors to be the second pair of eyes and ears, when we children stepped away from our own doorsteps to venture out into the community.  Moreover, the women of our neighborhoods were a tour-de-force within themselves.  These women were true friends, who prevailed and assisted, whenever the call came through for help.  In difficult times, they could be counted upon to baby sit, to prepare a meal or two, to comfort and nurse the sick, to lend a dollar, to help with a project, or just to offer a shoulder to lean upon.  They were also there in times of celebration: picnics, weddings, anniversaries, births, and parties.  The women of the neighborhood were a constant presence of support, loyalty, friendship, comfort, strength, and communal love.  In many ways, the women of our neighborhoods embodied the Proverbs verse:  “A friend loves at all times.”  (Proverbs 17:17)

In our study of two women, Ruth and Naomi, we find the godly construct of sister to sister friendship, and re-discover the necessity of embracing, (perhaps in a new way) the idea of women of the neighborhood.  Ruth and Naomi, were the epitome of women created for each other, supporting each other through times of challenge and times of celebration; not just by themselves; but also with other women of their community.

The book of Ruth is one of only two books of Scripture named for a woman (Esther is the other).  It is also one of the shortest books of the Old Testament, housing a powerful story of two women’s friendship in only four chapters.

While we think we know the story of Ruth and Naomi, because it is one of only several women’s narratives that receives solid attention and preaching time from church pulpits, there are many concepts within this book, oftentimes overlooked or ignored.  The first of these theological concepts is the theme of chesed.  Found throughout the book of Ruth, the meaning of this Hebrew word, in English, translates to:  faith, steadfast love, kindness, loyalty, and fidelity.  In the book of Ruth, God (whose name is only mentioned once in the last chapter) demonstrates chesed through the actions of Ruth, Naomi, Boaz, and the women of the neighborhood toward each other.

In chapter one, we find three women, loosely related by marriage, struggling with uncertain and difficult times.  Through no fault of their own, they find themselves in a land of famine, without the support of men (husbands & sons) whom have died.   As we know, widows without men or wealth, were at the very bottom of ancient society, and depended on the kindness (chesed) of their families and friends.  They leave the land of Moab (Ruth & Orpah were Moabites), to travel back to Naomi’s birthplace, Bethlehem.  As they make their way back together, Naomi urges her daughter-in-laws to return to “your mother’s house.” While we often read over this reference, “mother’s house” signals an unusual occurrence in Scripture.  Most often the bible refers to  “father’s house.”  Here,  we enter into a book of Scripture, where women were in charge of their own destinies.  This is just one of the many ways that the book of Ruth is unique, within the biblical corpus.

So, Orpah complies to Naomi’s passionate urgings; but Ruth resists.  In a familiar and beloved monologue, Ruth “presses” her mother-in-law to permit her to stay. (Chapter 1: 16-17).

Ruth’s speech is often recited in marriage ceremonies; however, we see the principle of “dabaq,” or “cleaving,” as friendship in this context instead.  Ruth pledges fidelity to Naomi, whose relationship is sister- friend to sister-friend, when familial ties are no longer the case.  Here,  in the most uncertain of times for Ruth and Naomi, the ideal of friendship becomes equal to the marital bond, or the ideal of “dabaq,” first found in Genesis 2:  “Therefore a man leaves his father and his mother and clings to his wife…….”   In their case, Ruth and Naomi cleave or cling to each other.

As Ruth and Naomi cleave to each other, in order to survive, we are witnesses to the building of community/neighborhood.  Literally journeying back to the Bethlehem, Naomi’s birthplace, they take the ideal of “dabaq” with them.

When they arrive in Bethlehem, they encounter the women of the neighborhood.  “When Naomi saw that Ruth had her heart set on going with her, she gave in.  And so, the two of them traveled on together to Bethlehem.  When they arrived in Bethlehem, the whole town was soon buzzing, “Is this really our Naomi?  And after all this time!”  (Chapter 1: 18-19, The Message Bible)

The Message Bible translation assists us in understanding what Naomi encountered when she went back home to Bethlehem.  The women of her neighborhood were there to greet her; however, Naomi has a peculiar woman with her, who certainly should have and did caused a stir because of Ruth’s ethnic background:

It is crystal clear in this story that Ruth is a Moabite.  The mention of her ethnicity and the country of Moab occurs in the text thirteen times in only four chapters!  As if the writer never wants the reader to forget, “Moab/Moabite” , the writer emphasized these two references over and over again.  When sister-friend Naomi brings Ruth, the Moabite, back to her birthplace, this was a bold and radical display of friendship.  Naomi was fully aware of the ethnic cast, which Ruth the Moabite presented to the neighborhood.

While God is not mentioned in chapters 1-3, certainly we feel God’s presence, as “The God of THE EXCEPTION.”  Ruth, who should have been cast out, as stated in the Torah, was instead accepted into the Bethlehem community.  God, through divine providence, makes this miracle happen for Ruth.

This Moabite woman, born into an accursed lineage (the progeny of Lot), is the ONLY WOMAN OF SCRIPTURE who personally receives the esteemed title of:  “eshet chayil.” The term in Hebrew means “woman of valor,” and denotes the characteristics of bravery, capability,  triumphant , wisdom, and worthiness.  The “woman of valor” is prominently noted in Proverbs 31: 10-31.  This familiar biblical passage, uses the term “eshet chayil,” as a “capable wife and mother.”  Yet, before Ruth becomes a wife or a mother, she is described in the story, as a “woman of valor – a eshet chayil.” (Chapter 3: 11)  This important biblical descriptive points to Ruth’s amazing personhood, which had nothing to do with title or privilege; but, had EVERYTHING to do with her intrinsic godliness.   Because of Ruth, the term “eshet chayil” or “woman of valor” is rescued from the narrowness of domesticity and patriarchy, and instead, becomes a designation of empowerment for women, regardless of our marital and/or maternal status.

Finally, we witness the transformational power of sister-to sister friendship, as healing and redemptive.  Naomi, who first describes herself as “bitter,” (called me “Mara”) has overcome her resignation and fearfulness of the future.  In community, both women find chesed.  In the last chapter of Ruth, the miracle of the neighborhood (community) is evident, when individual needs such as food, shelter, fellowship, and companionship  are provided to Ruth and Naomi, through their sisterhood and the neighborhood paradigm.  We witness the divine sanction of God,  by Ruth’s marriage to Boaz , and the “fruit” the marriage produced:  “When they came together, the Lord made her conceive, and she bore a son…….”

The God of THE EXCEPTION works a miracle through Ruth the Moabite woman. Once accursed, Ruth becomes the future mother of a dynasty in the House of David, which transforms the religious, political and economic destiny of Israel.  The most important kingdom of the Old Testament is actualized through the unlikely friendship of two women, Ruth and Naomi.

Naomi is also  fully blessed as the women of the neighborhood gather to assure her of a promising future:  “Then the women said to Naomi:  He shall be to you a restorer of life and a nourisher of your old age; for your daughter-in-law who loves you, who is more to you than seven sons, has borne him.”   What a  wonderful testimony of  the importance of friendship!

Finally, in the ultimate act of sister-girl friendship, the women of the neighborhood  gladly take on the assignment of  naming Ruth’s child (Obed).  We, the contemporary sisterhood, are assured, by scriptural confirmation of the Ruth and Naomi story, that true and authentic friendship is a sacred construct, not of our own making; but of God’s.

To God be the glory for the wondrous and divine gift of  sister to sister friendship!

How does the term, “woman of valor,” resonate with you?  Do you see yourself and/or other women in your life, as women of valor?  Explain.

What are the needs to sustain godly friendship?  How can we continue to “water” the friendship construct of “women of the neighborhood?”

“We should always have three friends in our lives.  One who walks ahead who we look up to and follow; one who walks beside us, who is with us every step of our journey; and then, one who we reach back for and bring along after we’ve cleared the way. First Lady Michelle Obama

“Things are never quite as scary when you’ve got a best friend.” – Bill Watterson

“Lots of people want to ride with you in the limo, but what you want is someone who will take the bus with you when the limo breaks down.” – Oprah Winfrey

“The enclosed materials are the property of Maxine E. Garrett and Tabitha’s Daughters Bible Empowerment Series. They may be used by you with our permission, which may be revoked at any time. All copies of the materials must include the following notice: “This material is Copyright [2017] Maxine E. Garrett and Tabitha’s Daughters and is distributed with permission.”