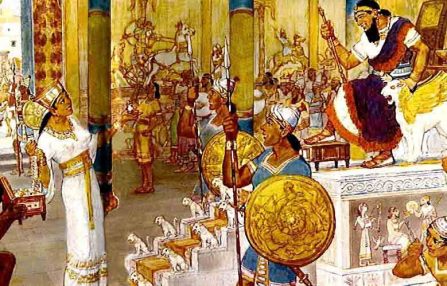 Follow your heart!  Follow your passion!  Follow your bliss!  These (and more) have become cultural mantras for those of us who desire a life with authentic meaning, purpose, and fulfillment.  But, what does it really mean to follow your heart, your passion, your bliss, when, so often, these esoteric pursuits feel like moving targets?  What if, at age 40, my bliss is different than age 30? How do I discover my passion? What about the practicalities of life; do I push these aside for a spiritual quest which may ultimately lead to even more confusion? Should I trust my inner voice, or is it just emotional delusion?  Finally, when will I find my purpose and spiritual fulfillment?

No wonder there are thousands of books written about the ever elusive spiritual journey.  One question seems to lead to another, and another, and another, until there is an exhausting overload of unanswered perplexities.  Yet, perhaps our questions are the REAL stuff of life; for without them, we may find ourselves living a mundane and static existence.  Perhaps, it is these compelling questions that push us out of our comfort zone, causing us to seek the hidden, mysterious path that ultimately leads to a place of emotional and spiritual growth.

As women of faith, we realize the answers to many of life’s essential questions are found within the pages of Holy Scripture. In the book of Proverbs, one of the wisdom writings of the bible, we are encouraged to trust God for the answers to life’s difficult questions:  “Trust in the Lord with all your heart; do not depend on your own understanding.  Seek His will in all you do, and He will show you which path to take.”  (Proverbs 3: 5-6 – New Living Translation). Depending upon God for direction and guidance, instead of leaning to our own understanding, is defined in scripture as wisdom.  The bible tells us:  “How much better to get wisdom than gold; to get insight rather than silver.” (Proverbs 16:16)

10 When the queen of Sheba heard about the fame of Solomon and his relationship to the Lord, she came to test Solomon with hard questions. 2 Arriving at Jerusalem with a very great caravan—with camels carrying spices, large quantities of gold, and precious stones—she came to Solomon and talked with him about all that she had on her mind. 3 Solomon answered all her questions; nothing was too hard for the king to explain to her. 4 When the queen of Sheba saw all the wisdom of Solomon and the palace he had built, 5 the food on his table, the seating of his officials, the attending servants in their robes, his cupbearers, and the burnt offerings he made at[a] the temple of the Lord, she was overwhelmed.

6 She said to the king, “The report I heard in my own country about your achievements and your wisdom is true. 7 But I did not believe these things until I came and saw with my own eyes. Indeed, not even half was told me; in wisdom and wealth you have far exceeded the report I heard. 8 How happy your people must be! How happy your officials, who continually stand before you and hear your wisdom! 9 Praise be to the Lord your God, who has delighted in you and placed you on the throne of Israel. Because of the Lord’s eternal love for Israel, he has made you king to maintain justice and righteousness.”

10 And she gave the king 120 talents[b] of gold, large quantities of spices, and precious stones. Never again were so many spices brought in as those the queen of Sheba gave to King Solomon.

11 (Hiram’s ships brought gold from Ophir; and from there they brought great cargoes of almugwood[c] and precious stones. 12 The king used the almugwood to make supports[d] for the temple of the Lord and for the royal palace, and to make harps and lyres for the musicians. So much almugwood has never been imported or seen since that day.)

13 King Solomon gave the queen of Sheba all she desired and asked for, besides what he had given her out of his royal bounty. Then she left and returned with her retinue to her own country.

The Queen of Sheba is one of a small, elite group of women mentioned in both Old and New Testament scripture.  Her story is told twice in the Old Testament (1st Kings, chapter 10 & 2nd Chronicles, chapter 9).  Jesus makes reference to her (Queen of the South) in the gospels of Matthew (chapter 12:42) and Luke (11:31).  She is also referenced in extra-biblical sources, including the histories of Josephus, (an ancient historian and writer) and in ancient Egyptian literature. This queen made such an impact on history that all three of the monotheistic religions (Judaism, Christianity, and Islamic) claim her as their own.  Because she made such an imprint on history, there is scholarly debate as to the Queen of Sheba’s ethnicity – was she Nubian (Cushite – black), Ethiopian, or Arabian.  While scholars continue to debate this queen’s origins, we can attest to this fact:  She was a deeply pigmented (brown or black) sovereign whose story is an important part of both testaments of Scripture.

From the book,” Troubling Biblical Waters,” (Rev. Dr. Cain Hope Felder) :  “If we have no biblical or non-biblical data by which the story of Queen of Sheba can emerge from the realm of legend into the full light of history, why have Josephus, a number of Church Fathers (Origen & Jerome), and the Ethiopians themselves claimed that the Queen of Sheba was an African woman?  Josephus calls her “the queen of Egypt and Ethiopia,” as he amplifies considerably the text of 1 Kings 10: 1-10, 13…..Although no scientific certainty can be claimed for the African, or more precisely, the Ethiopian identity of the Queen of Sheba, much evidence exists that leads to this conclusion.  Origen and Jerome both believed her to be of African ancestry and built their exegetical opinions on this without expressing any doubt.”

Some biblical scholars believe the Sabeans were actually the people occupying the territories of southern Ethiopia and southwest Arabia.  Their kingdom was known for its great wealth and natural resources such as exotic spices, precious metals of gold and silver, and cedar wood.  When the Queen of Sheba makes her sojourn thousands of miles to meet with King Solomon, the bible records that she brings an immense treasure with her.  In 10th century B.C.E., Sheba’s queen leaves the kingdom to seek something she cannot find at home.

What compels a sovereign queen who possessed great wealth and power to leave her kingdom behind?  The story in 1st Kings reports the Queen “heard about the fame of Solomon and his relationship with the Lord.”  Furthermore, the bible reveals to us that King Solomon was the wisest of all the kings of Israel and God granted Solomon great wisdom (1st Kings 3:12).  It would seem the Queen of Sheba left her kingdom in search of answers to her “hard questions,” and wise King Solomon answered them all.  It seems that despite immense wealth and privilege, this sovereign decided that wisdom was more precious than all the gold and wealth in Sheba.

King Solomon is credited with writing the book of Proverbs, where many of the teachings of wisdom are found.  The Hebrew word for wisdom is “hokma,” which is a feminine noun.  Throughout the wisdom books and writings, especially Proverbs, Wisdom (personified) is presented as a female figure:

In verse 9 of the text, the queen acknowledges King Solomon’s skillfulness, as ruler and administrator; but, more importantly, the Queen of Sheba blesses the Lord for placing Solomon on the throne.  She, in seeking wisdom, finds the God of Israel, who grants wisdom to her and all who desire and seek God’s wisdom diligently.

One of the working lessons in this story is :  in order to find wisdom,  we must leave the place of security and comfort to dare to go beyond our own fence.  It is our desire for God which compels us to go.  The Queen of Sheba was sovereign (and so are we), so she does not ask anyone for permission to go on her journey.  She simply takes the lead and becomes the hero in her own story.  In the search, her intellectual restlessness and curiosity is satisfied; but more than this, she encounters the God of Israel, the Giver of all wisdom.  It is God and God’s wisdom that she takes with her on her journey back to her own country.

Define wisdom in a biblical context

What does it mean to you to be “sovereign?

Jesus tells us to: “Seek and you shall find.”  What is the difference between looking and seeking?

What motivated the Queen of Sheba to leave her kingdom to search for answers to her “hard questions?” What do you imagine some of the “hard questions” were?

What does the Queen of Sheba overcome to start and finish her quest?

Since God is the giver of both wisdom and intellect, what is the difference between the two?

What does it mean to you to go beyond your own fence?

Why is wisdom important to the life of a believer (you and I)?

How is spiritual fulfillment, bliss, and passion connected to wisdom?

Final Thoughts
“Search for wisdom as you would search for silver or hidden treasure.  Then you will understand what it means to respect and to know the Lord God.” (Proverbs 2: 4-5)
“Turn your wounds into wisdom.”  Oprah Winfrey
“Knowledge speaks; but wisdom listens.”  Jimi Hendrix”
“Knowledge comes; but wisdom lingers.” Sir Alfred Tennyson
written by Evangelist Angie Garrett – maxinegarrett33@yahoo.com